Finally, we have some livestock. No, not chickens. Think smaller. Think much less aggressive. Think just as likely to eat you given half a chance. We finally have our worm farm. We’ve been burning all our food scraps and vegetable peelings since we moved in, so as not to attract vermin. We don’t generate much, after croft work all day we tend to demolish meals, but vegetable peelings are a resource that I don’t like wasting. The worms turn that waste stream into valuable worm castings and liquid plant feed. You can buy commercial units but they can cost upwards of £90 and it’s hard justifying that sort of expense when we’re on a tight budget. This is my solution.

I started with a pair of 80 litre recycled plastic tubs. I drilled a load of holes in the bottom of one, and fitted a tap in the side of the other, right at the bottom.

I put a double layer of weed membrane in the bottom of the first tub, to cover the holes, and filled the tub with worm bedding material. In my case, I used old manure and hay. When we were digging the old manure out of the derelict garage, there was a thick layer of hay that was reasonably intact. It was full of composting worms, so I set a load of it aside for this project. I’d also set aside a bucket of really prime material that was more worms than manure, and had been feeding them with old coffee grounds. I added this bucket to the top of the tub while I was at it. 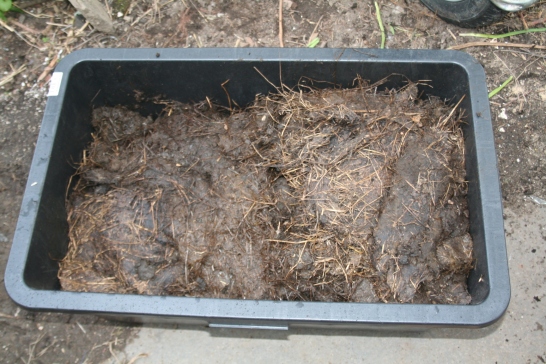 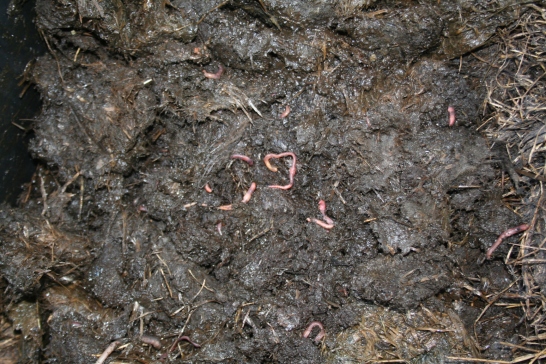 I put a couple of bricks in the bottom of the other tub, and put it up on a stand I made from stacked rocks. I put the manure filled tub inside the one on the stand. Quick bit of advice here, it turns out that 80 litres of wet manure is quite heavy. Shocker eh? It would have been much easier to put the manure in after putting it on the stand. It was raining, I was rushing. Give me a break. Anyway, I added some clean cardboard to the top, this keeps the bedding moist. I’d cut a scrap of plywood to size, and put it on top as a lid, held down with a rock. Job done. To add scraps I just take the lid off, fold the cardboard back and put them on top of the bedding. 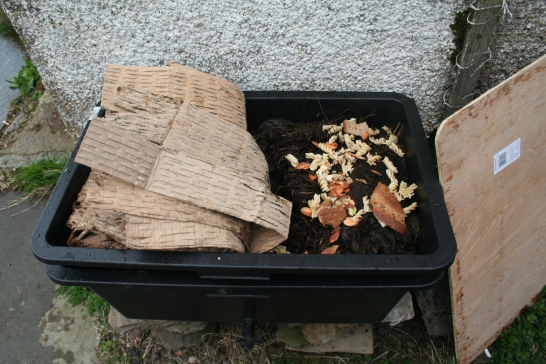 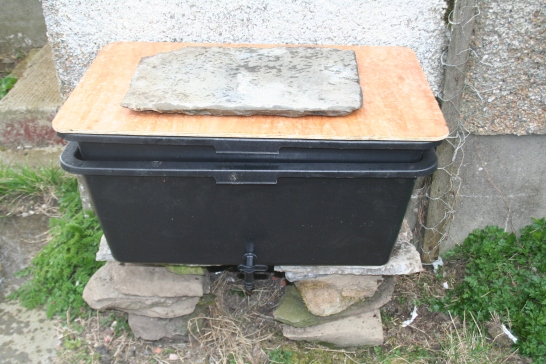 Job done. The liquid feed will collect in the bottom tub, and get drained off using the tap. To harvest the castings I’ll just start adding food scraps and coffee grounds to one side. Within a few days most of the worms should have gone to that area. allowing me to harvest the other side and replace with fresh bedding. Then I’ll repeat the process on the other side over the next week or two.